So far over the last 3 years we have succesfully rehomed 19 terrapins, 2 tortoises, 83 bearded dragons and 41 snakes 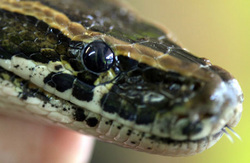 African Rock Python found in Newcastle.  This Python came to us via Dragons Den pet shop after it was found in a  Newcastle alleyway by a 12 yr old lad.  Typical example of people who buy a larger breed aggressive breed and do the wrong thing by dumping the snake when it gets too big and aggressive for them.  http://www.journallive.co.uk/north-east-news/todays-news/2011/05/14/six-foot-killer-python-found-by-children-in-newcastle-street-61634-28692201/    for newspaper article or  http://www.youtube.com/watch?v=a4qNLVMRflk  for video.
This sort of incident gives responsible reptile keepers a bad name as the press always make a big story out of it and can never facts right about the snakes.  If you have a snake like this that you cant look after or cope with please contact us instead of dumping it like this one was 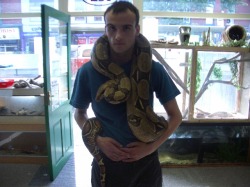 This is the 7 1/2 foot Boa Consrictor we rescued first week in June.  She was a well looked after snake who the owner had passed to a friend who had very little knowlodge of snakes, especially bigger breeds like this.  Needless to say she went for the new owner as soon as he got her home, and escaped into his garage. After scaring her half to death by numerous attempts from a few friends to recapture her, he rang the police and they passed him on to us.  She was extremely aggressive due to all the stress but has since calmed down. She has been with us a week now and is a very placid snake and in good health.

The lesson in this one if you are inexperienced with snakes dont try to take on something you dont know much about.  Do a bit of research first and try and find someone who has type of snake your planning on keeping and gain experience in handling it. 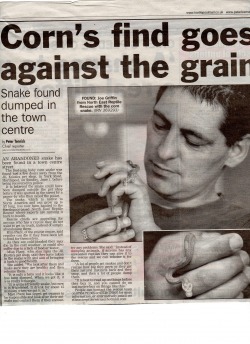 This was a Baby Corn Snake that was dumped outside my friends shop one night.  Luckily a member of the public spotted it and called the police. It was dehydrated and looked like it had not fed for a couple of weeks or more.  It is now eating a drinking well and hopefuly will be rehomed shortly to a good home.

Please if any of you have a reptile you dont wish to keep, call us or ring your local police station. Dont just abandon it outdoors as their is a great chance it will not survive. 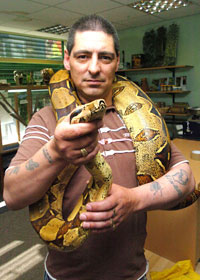 Please click on the photo to read newspaer article about this Boa.  Link opens in new window. 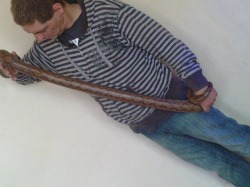 Not all the animals we recieve are abandoned or in ill health.  This Columbian/brazilian Rainbow boa is one of the few animals we recieve in very good health.  The owner was reluctant to part with her after raising her from a baby for 7 years, but due to not having enough time to look after her she contacted us to rehome her.  Aptly named Cleopatra, she is one of the best examples of an owner doing all the research into an animals needs and wellbeing. 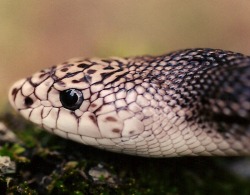 Missy is a 13yr old florida pine snake who is microchipped. she is ready for rehoming as from the 30th june 2010 but only to experinced keepers as she is still agressive.  she is approx 7ft long. 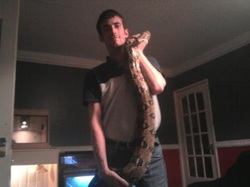 Young male Royal python that came to us 2nd week in august 2011, him and the sub-adult female that came with him are doing fine

This Spiny Tailed Iguana came to us from her owners who hadnt had her long.  Previous to them she was a show piece animal in a pet shop in Merseyside, where she had been locked up with no human interaction for over 4 years which resulted in her being really aggressive and pretty much viv defensive.  This sort of breed may seem appealing due to not growing as large as other iguanas but these are naturaly an aggressive breed and should only be bought as pets by people with much experience of iguanas 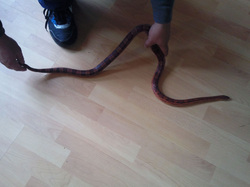 Up for rehome female (presumed
but not probed) corn snake.  roughly 3ft long eating regulary on medium mice and
occasional chick.  Sheds ok and goes to toilet fine.  She was under weight and
dehydrated when she came to us but now ready to be rehomed.  Rehoming fee of £30
which goes back into feeding and looking after all the other rescues we get.
Rehoming aggreement to be signed 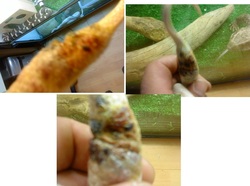 BE WARNED THESE PICTURES ARE NOT NICE
Snow corn that was dropped off
yesterday to me. Has had an infection for a few weeks and the owner did not get
it looked at. She is in Jaqui Patersons vets in stockton at the moment and
hoping she will make a full recovery. She has had anti biotic injections and
speacial baths and had to have lots of pus squeezed out the infected area If you
have a reptile that is ill or injured for god sake ppl dont be scared of
contacting someone if you cant afford a vet. Even the rspca will help even if it
means you signing the animal over to them at least they dont suffer for weeks
and weeks. Incase not many of you know there is a law that has been out for
about 3 years regarding animal welfare. If an animal is in your care and needs
medical help you are liable to prosecution if you dont get the animal treated.
Cases that look as bad as this can be avoided by early treatment. 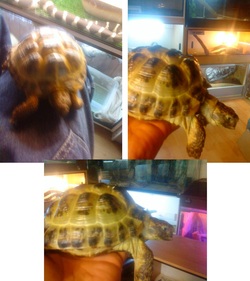 Up for rehome. Hermans tortoise approx 7 1/2 year old 5" long 4" wide. There is a rehoming fee which goes back into the rescue to feed and look after other
rescues. Rehoming aggreement to be signed and i will be asking questions to see
if you have the knowledge and experience to give this little one a forever home 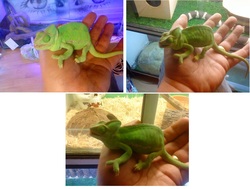 This little girl/boy come in
tonight.  Apparently been left in cardboard box on a doorstep in durham thursday
night.  in a bit of a bad way, no balance or energy keeps falling over so
nicknamed it clumsy, not eating and really dehydrated.  got him/her under a uv
light and basking light and managed to get some water mixed with hydro life into
him/her.  Still dosent want to eat even placed a wax worm in the mouth but no
joy.  Waiting on phone call from rspca to get him/her into emergency vets
tonight

UPDATE   sadly after 5 weeks being cared for and looked after the vet said she would never get any better and her quality of life would never improve so it was decided to put her gently to sleep so she is not suffering anymore. 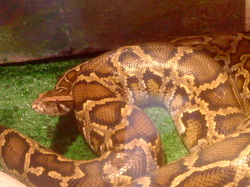 Lovely male Burmese Python 11ft long.
We rescued him because he had outgrown his owner,  who used to use him on stage as part of a burlesque act.  Typical example of someone buying a Burmese at a young age not really realising how fast they grow and how big they actualy get.  He is ready to rehome now after going through his quarentine period.  Experienced owners only who must have the appropiate size set up,  and dont forget he has still some growing in girth and length to go yet 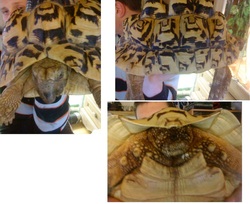 Presumed leopard x african spur thighed tortoise to rehome we say hes a cross although he looks 85% leopard he has some physical features of a spur thigh also.  He is a big one and measures approx 11inches by 7inches wide.  Came to us as owners didnt think they could no longer provide the best care for him.  Nicknamed him hungry horace because he eats and eats and  still wants more 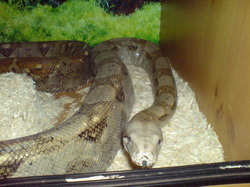 Hog island boa.  approx 5 1/2 ft  unsure of age and presumed
male.  Hasnt been out of his viv for over 5 weeks as owner was
inexperienced with snakes and didnt know what to do.
Excuse the really bad quality of picture as he isnt very photogenic and i couldnt get him to stay still long enough (think he was just enjoying his new found freedom lol) 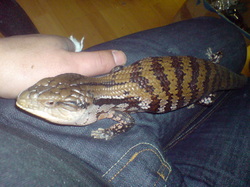 Year old male, very nice temprement as most skinks usualy are. This chap was with us a while but has now been rehomed. 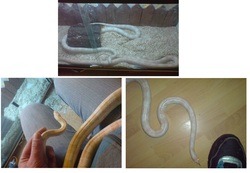 Male and female snow corns.  been with us a few months,  male handles fine wheras the female even tho she is ok at being handled is still very nervous due to not much interaction through her first years.  approx age of both is about 3 - 4  years.  These are on hold until the 20th January but if the potential new owner changes his mind we must stress that these are to be rehomed together 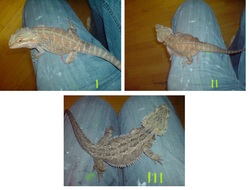 We have had another 3 bearded dragons brought to us today in unfortunate circumstances.  2 are missing a back leg.  All 3 where dumped in a shoe box in someones back garden during this morning.  these are all around 4 - 6 months and have a nice amount of red in their colouring. They are are healthy weight and look like they where looked after ok.  This happened in Washington (tyne n wear)
so if anybody knows anybody who was recentley trying to sell or find homes for beardies that sound like this in the washington area please let me know as they have to be reported. 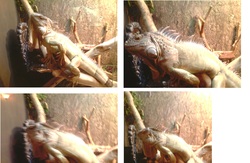 We have yet another rescue today,  a 3ft male green iguana.  He has been with his present owner for 2 years since he found him wandering on the street and has been tame and placid until recently when he has turned aggressive

Asian Water Dragon approx 18 month old.  Came to us in perfect health,  reason the previous owners parted with her was because the crickets kept escaping out of the viv into the house,  this is something you should consider when thinking about having any lizard that eats live insects as it is quite common for crickets/locusts to escape 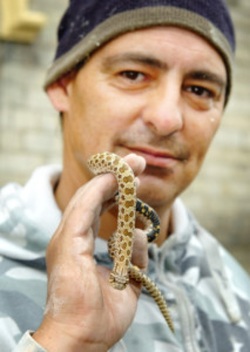 A western hognose that was brought to us one midnight in july by the police after someone found him loose At the marina in Hartlepool.  Click on the picture to be taken to the newspaper article